Creaky lifts, so-so trails and land mines. And shrugs. It’s all part of the charm at the Jahorina ski resort. By Peter Frick-Wright, REPORTING FROM SARAJEVO, BOSNIA-HERZEGOVINA
11:40 AM PST, December 12, 2008


There is a saying that visitors and locals alike use at the Jahorina ski resort, just outside Sarajevo, Bosnia-Herzegovina. They use it when they want to invoke the problems of a country a decade removed from a brutal war without getting into specifics. They use it when they’re trying to convey the frustrations of running a business in their young year-old nation to a passing travel writer; they use it to explain to the same writer that his traveler’s checks might as well be newspaper.

They can say it without saying it, exactly. The shrugging shoulders, raised eyebrows and palms skyward at hip level all connote the same, catchall phrase that means, „There’s nothing I can do for you.“ But you’ll hear it spelled out too. When a broken sewage line adds aroma to the five-minute walk to the slopes, or when the chair lift closes abruptly and skiers have to hike back to their cars with nary an explanation or free hot cocoa vouchers for the trouble. „Oh well,“ they say, because this is part of the fun, the experience. „This is Bosnia.“

Another popular expression says that Bosnia is so mountainous that if it were rolled out flat, it would be the size of Russia. That’s not quite true, but I came to enjoy that geology and spend some time on my snowboard anyway. For the price of a lift ticket at home, I could nearly get a season pass at Jahorina resort, a roughly 6,000-foot peak in the Dinaric Alps near the center of the former Yugoslavia.

The mountain itself is firmly average, compared with resorts of similar size: 12.5 miles of moderately steep trails plunge down a vertical drop of 1,932 feet. The terrain park consists of a rail and a small jump near the base of one of the 10 lifts, which can move 7,500 skiers per hour.

To get to one of the creaky, aging two-seater chairlifts that serve most of the mountain, you must first pass a creaky, aging man or woman with a tan face and hard eyes selling juices, candy bars and rakija — the local brandy — served in plastic shot glasses. These vendors work from open to close, seven days a week, with ample new inventory stashed in backpacks under their tables.

After a 15-minute ride to the summit, a glance northwest reveals the weather in Sarajevo, about 20 miles away. Sarajevo is known for its foggy winters and the inverted pressure system that holds in the weather and delays planes out of its airport. Oddly, the foggier it is in Sarajevo, the higher SPF you’ll need at Jahorina.

Four of the 10 lifts at Jahorina are of the button variety, which aren’t seen much in the States. Think of a rope tow that pulls from your hamstrings. Snowboarders abhor them and vice-versa. One unsuccessful (and embarrassing) attempt to ride a button lift earned me a stern recommendation from an operator that I contain my future rides to one of the six 1980s-era two-seaters that serve the rest of the mountain.

These same lift operators — and the guy in charge of grabbing the chair as it swings around so it doesn’t hit you too hard in the rear — will be dispatched to rescue you if you venture into the ample backcountry off the back side of the mountain and get lost. The rescue expedition will require that the lifts be shut down and create a very annoyed line of skiers and snowboarders, but you’ll have to stick around and listen in on the conversation to figure this out.

Direct questions are met with hostility, and responses change as to why the lift has been shut down. Resort websites list the problem as fluctuations in the power supply that are beyond the lift operators’ control; a public forum addressing every aspect of the resort mentions nothing about lost skiers. You expected a straight answer? Please. This is Bosnia.

„If you’re looking for adventure, you may find too much.“ That’s Romeo Markovic, a snowboarder I encountered while hiking for powder on the backside of the mountain. We’re in a lift-top lodge with a wood-fire cooking pit at the end of the day, discussing everything Bosnia. He’s just profiled me perfectly: a desk-bound 9-to-5er looking for adventure during my travels; I thought I had him pegged as a life-long ski bum.

Turns out he has a biotechnology doctorate and his own company. He’s prone to sticking out his tongue and crowing when he rides off on his snowmobile; he’s already started a conversation with the two women sitting down at the table next to us.

By „too much adventure,“ I assume Romeo is speaking of unexploded ordnance from the war in Bosnia in the ’90s. The area has yet to be completely de-mined, and a sign on the western out-of-bounds marker warns of pazi — mines.

But Bosnians aren’t too worried about mines anymore. Least of all, it seems, at Jahorina, where skiers shrug off questions about the skull and crossbones sign near an out-of-bounds marker. The military kept records of mine locations and although a few of those papers were lost, most of the dangerous locations are known.

Romeo is referring instead to misadventures. A chairlift once got stuck when the overhead cable jumped off a guide. Three attendants evacuated riders from the immobile lift with a ladder — chair by chair — for six hours.

If a lift stops or you have some problem and try to complain to the director of the resort, Romeo says, you’ll find that each individual feels little personal responsibility for overall operations. Frustrating, yes, but not surprising. This is Bosnia.

No one said this at Jahorina 20 years ago. In the ’80s, Jahorina was Yugoslavia’s premier ski resort, the main tourist attraction of Sarajevo as it blossomed into a world-class city. Jahorina had the honor of hosting the women’s skiing competition at the 1984 Olympics and packed hotels and student hostels fueled a thriving après-ski night life. The consistently light powder in the valley bordered by Jahorina even earned it the nickname, „Rajska Dolina,“ or Heavenly Valley.

Then the war started. In the spring of 1992, as Yugoslavia dissolved, the Yugoslav People’s Army declared independence for Bosnia. Serbia moved in against the new state. Bosnian Serb army leader Radovan Karadzic set up camp in the nearby ski town of Pale and led the 3 1/2 -year siege of Sarajevo from Jahorina’s doorstep. New additions to the resort were limited to fortified bunkers and military compounds. The sagging skeletons of those buildings still stand, starkly visible on the hill during the ride up the longest lift.

Investigating one of the crumbling masses next to a popular route through trees, I meet Zoran, Sasha and Dan, three students from Banja Luka vacationing for a week on Jahorina and staying in Pale. They pose for a photo next to a former military compound, but don’t want the building in the background. „We came here to enjoy the nature and being outside,“ Zoran says. „War is bull.“

On the opposite side of the mountain, the burned-out shell of the Jahorina hotel, formerly the resort’s largest, sits next to a decommissioned chairlift. The impressive structure is practically still smoldering from the day in September 1995 when an accidental fire in the hotel made several hundred refugees from Sarajevo homeless once again. Strewn bits of ruined clothing and abandoned belongings still poke out from the broken glass; the charcoal trim of burned wood contrasts with the snow. The building looks untouched, as if the whole episode escaped from memory and obligation as soon as the flames went out. Hotel Nebojsa, with its glass observation bubble and gourmet kitchen, went up next door, but the crispy frame of Hotel Jahorina remains.

As do two youth hostels. Hotel Partizan stands empty at the center of the ski area, with broken windows and a rotting sign, but more or less intact. Hotel Sator, a stately behemoth of a building and the oldest lodging on the mountain, is eight seconds from the slopes. Sator’s grand wood and stone visage looks up the slope toward descending skiers. The building’s sole function: holding a wind-tattered advertisement for www.jahorinainfo.com.

But amid the post-apocalyptic structures and the cavalier approach to customer service, there is much to celebrate.

When a particularly nasty three-way crash between my hip, a patch of ice and my 10-day lift ticket left me with an unreadable card, the woman at the closest „Ski Kasa“ issued me a new one immediately, no questions asked, with two bonus days. „People here are polite,“ she said.

When the top of the lift became icy, making it difficult for snowboarders to disembark, attendants allowed riders to unstrap both bindings and carry snowboards on their laps. (Try that at a U.S. resort and you’ll bring the whole uphill procession to a swinging halt. Riders drop gloves and poles all the time. Imagine the lawsuit from a falling snowboard.)

After a group of snowboarders in the backcountry informed me that for about $80 I could rent two snowmobiles and a driver to haul me up the mountain, they added me to their group without delay and gave me rides to the best powder runs on Jahorina. No deposit necessary, no liability waiver to sign. (I did have to wait for the driver to finish his cigarette).

Then there’s the food.

Belt-busting portions of tender, slow-cooked meat and potatoes and cabbage, all for less than you pay for a movie ticket in Los Angeles. Servings per container: too much. I dreamed of helpings this size during teenage growth spurts. It’s no surprise that Bosnia has one of the tallest populations in the world.

Chefs emerge to serve food from pots simmering over wood coals at the center of restaurants, sometimes with a boar’s head over the flames and a framed picture of Yugoslavian leader Josip Tito under a rifle mounted on the wall. The theme is a common one in rural Bosnia, one foot in the present, one foot firmly planted in the past.

But there are signs of a promising future for Jahorina. There is talk of privatizing it, which would probably solve many of the service and maintenance problems. Luxury accommodations at Hotel Nebojsa and Hotel Termag are bringing in a more affluent crowd.

Tourism numbers have swelled here in the last few years as Croatia, Bosnia’s coastal neighbor, boomed.. Soon the area will be able to compete with budget ski resorts in Austria and Slovenia.

Boris Markovic, (no relation to Romeo) who works the front desk at the modest Hotel Kristal, says there are plans to rebuild the Hotel Jahorina. I ask when and he says he doesn’t trust the construction to begin on time. „It may be [a few] months, it may be years . . .“ He trails off, but his eyes finish the thought. 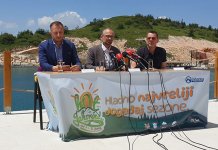 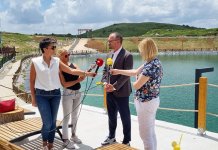 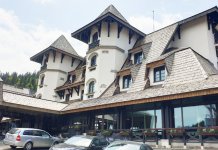